About
About the Citrus Fruit Agricultural System 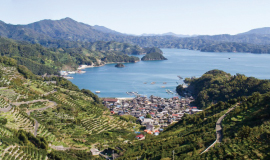 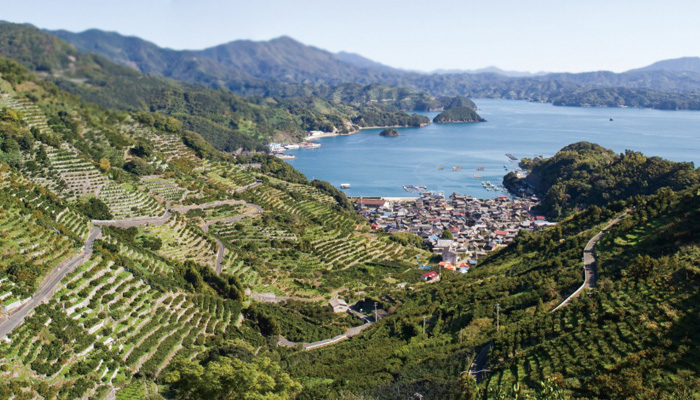 Terraced orchards carved into hills and mountains that slope steeply downward toward the Uwa Sea extend from base to summit, creating stunning scenery often described as "farmland that rises up to the heavens." These terraced orchards, shaped using stone retaining walls, are managed by individual farming households using ingenious techniques and approaches such as keeping trees compact in size to facilitate more efficient agricultural operations and planting them densely to ensure sufficient crop yields.
In addition to contributing toward the creation of Nanyo's citrus fruit agricultural system itself, each local producer has helped to build these terraced orchard landscapes throughout the region's long history, working to overcome harsh topographical conditions and carve out a living through sustained, tireless efforts. That is why Nanyo's terraced-orchard landscapes are the pride of local growers. 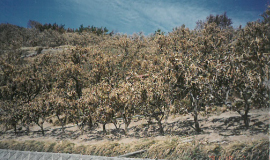 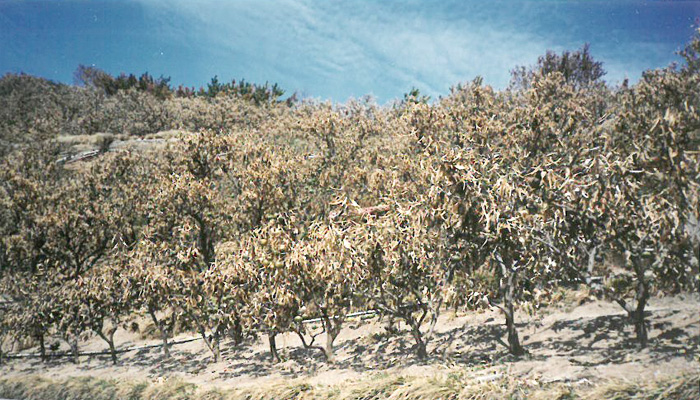 In response to tree withering and leaf loss brought about by salty winds and direct salt damage caused by typhoons in 1991 and 2004, tree withering and reduced fruit quality caused by heavy snowfall and severe cold in 1917 and 1977, tree withering and severely reduced production volumes brought about by an unprecedented drought in 1967, and other such natural disasters over the years, local producers have erected a system of windbreak barriers, diversified the number of citrus varieties grown, set up large-scale watering systems, and taken other measures to establish a system of resilient local production.

Nanyo region orchards were heavily damaged—which included land collapse and washing away of trees—by the landslides, river flooding and other disastrous effects of the July 2018 torrential rains and floods. However, the region has come together as one in efforts to restore the functions of this production region.

Advantage 3Preservation of Techniques via the Fruit Growers' Association 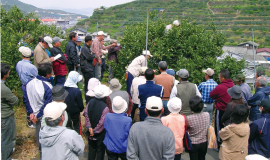 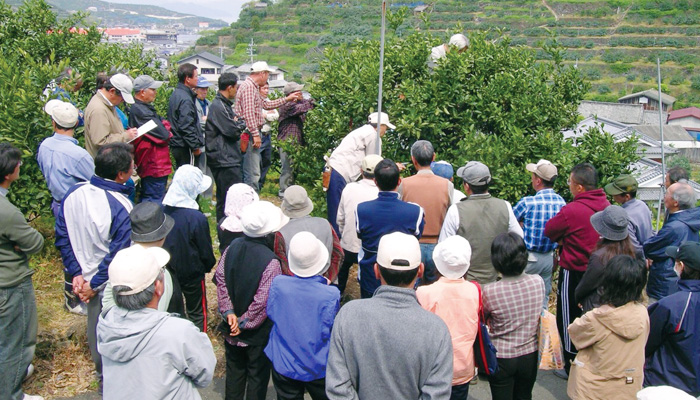 The local Fruit Growers' Association is an organization that brings together ambitious producers who want pursue fruit production in a more autonomous manner. The organization was founded in the Nanyo region, has spread throughout the nation, and has a long history behind it. They offer workshops for young farmers on stone wall building techniques and make other such efforts to pass down techniques and practices to future generations. 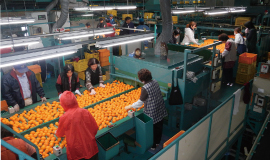 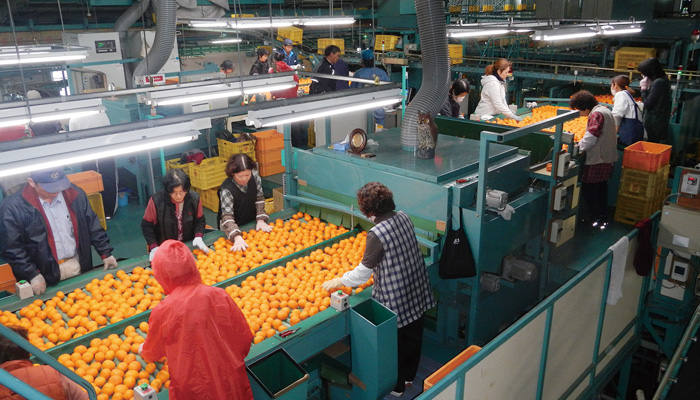 The organizations known as kyosen are unique to the Nanyo region. They comprise large numbers of small-scale, family-owned production operations that unite through strong organizational ties to pursue fruit production and sales in autonomous and strategic ways. Producer-run kyosen have served as the very foundations of Nanyo's citrus fruit agricultural system, which is based on a strong passion for citrus fruit growing inherited from past generations of growers, unwavering determination to further develop the production region into the future, and an ambitious mindset that encourages the introduction of new technologies and frameworks into existing agricultural operations.

The Nanyo region has a warm climate with an average temperature surpassing 16°C / 61°F, and it is also blessed with the so called "three sunlight benefits"—namely, ample amounts of direct sunlight, sunlight reflected from the sea's surface, and sunlight reflected and heat radiated from the stone walls. Together, these provide the conditions necessary for high-quality citrus production. Products from the sea are utilized in citrus fruit growing operations, in forms such as fertilizer made using fish waste products and lime materials made using the shells of standard pearl oysters and Akoya pearl oysters. In addition, residuals of juices squeezed from local citrus fruits are used to develop and create Ehime brand products such as Mikan Fish and Ehime Akane Wagyu Beef, achieving a system of cyclical regional agriculture in coordination with the local aquaculture industry, stock breeding industry and other industries. 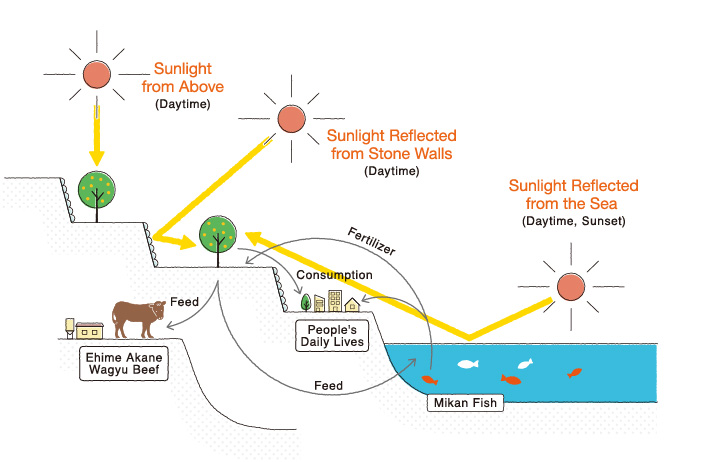 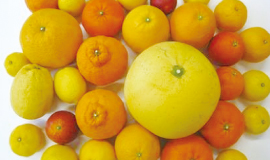 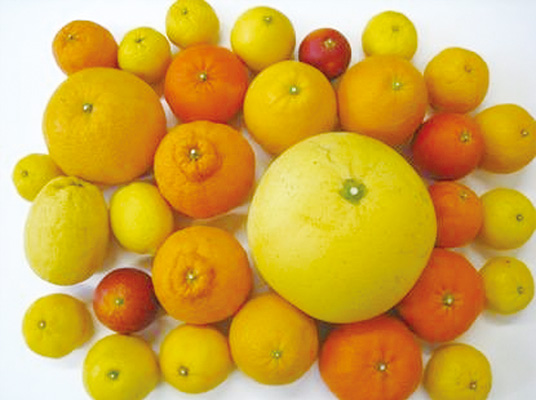 Nanyo accounts for roughly 70 percent of overall citrus fruit production volumes in Ehime Prefecture, which is the leading citrus producer in Japan.

Ehime is Japan's leader both in terms of citrus fruit production volumes and varieties, which include not only Satsuma mandarin oranges but a large variety of other late-ripening citrus types as well, and Nanyo's production activities form the backbone of this industry.
The production and sale of this diverse array of high-quality citrus fruits acts as an extremely important revenue source for family-run citrus production businesses in the Nanyo region, who also produce a wide range of processed-citrus products such as juices. Moreover, in order to maintain and enhance the Nanyo production region's competitive strength into the future, local producers work in cooperation with the local Mandarin Orange Research Center to develop and preserve a variety of germplasm (genetic resources) which are essential components for developing new citrus varieties. 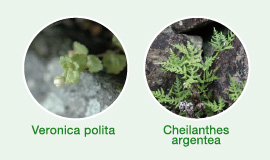 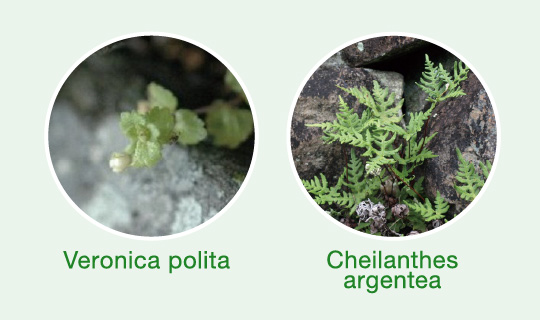 In Nanyo, each of the terraces in the orchards built on steep slopes is supported by stone retaining walls on one side in order to prevent soil loss through erosion and minimize runoff into the sea, thus contributing to preservation of the local environment. Although stone walls represent a harsh living environment from the perspective of plant life, these walls prevent invasion by non-native species and foster favorable growing environments for rare local plant life such as silver cloak fern (Cheilanthes argentea) and gray field-speedwell (Veronica polita), thus playing an important wall in the preservation of local biodiversity.

Advantage 8Passing Down Local Farming Culture from Generation to Generation 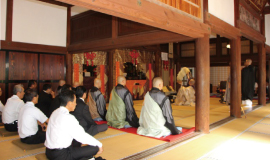 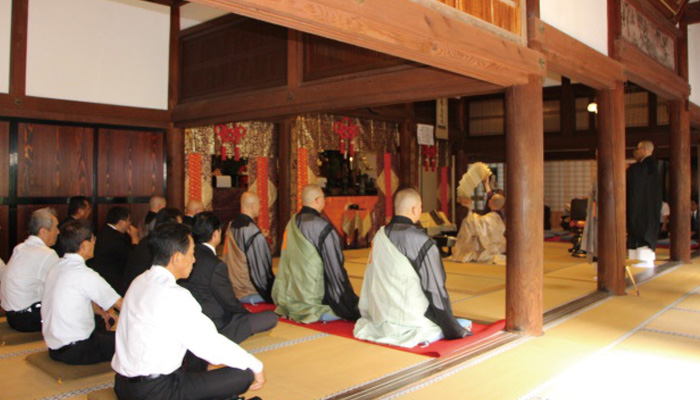 In day-to-day life, local Nanyo culture such as the traditional Mandarin Orange Festival held as an expression of gratitude to local citrus-growing forefathers, an assortment of traditional local cuisine made using citrus fruits, and other cultural aspects with close ties to citrus cultivation are passed down from one generation to the next. Citrus fruit agriculture and its long history have deep roots not only in Nanyo farming households, but in the daily lives of all people living throughout the region.